Dumpling Story Making dumplings with the heart of including luck

Making dumplings requires a lot of work.
In addition to making the dumpling fillings with various ingredients, you must also make the dumpling wrapping that covers the filling.
By pouring out sincerity into our taste, we make proper dumplings. 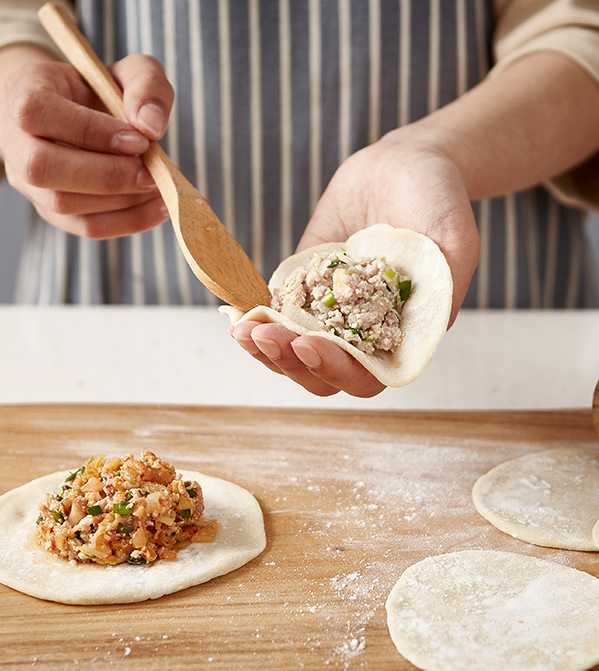 Making dumplings with the heart
of including luck.
There is a scenery in which family members talk with each other while making dumplings before traditional holidays. As there is a saying, “your child will be pretty if your dumpling is pretty,” it is a traditional food each of which is made with sincerity.

Unlike Chinese-style dumplings with thick skins, Korean-style dumplings have thin skins and lots of vegetables in them. If we put the far two ends of a dumpling looking like a long-shaped song-pyeon, it becomes the dumpling in Korean sense.

As the taste created by sincere hands of mothers
dumplings require a lot of work to make. In addition to making the dumpling fillings with various ingredients, you must also make the dumpling skin that covers the filling. As such, dumplings are very precious foods. Even though it is a small dumpling, in each dumpling, so many different meanings and wishes are included. GYODONG FOOD creates proper dumplings by adding sincerity and taste together.

We create lucky
and tasty dumplings.
As eating a fully filled dumpling brings you luck, we’ve created lucky and traditional dumplings with good ingredients and sincerity.

We wish that many people eat the nutritious dumplings to have happier and more energetic life.

How to eat deliciously